After the bulldozer terrorists attack in Jerusalem on Thursday July 22, I published  on NowPublic.com an article named  “The Jerusalem syndrome :bulldozer runs wild in Jerusalem”.

The article was pure news not yet colored by personal opinion, and was immediately followed by updates from witnesses who almost get wounded or killed or where under heavy stress due to the murderous event they eye witnessed.

The point for republishing here hot news from 4 days ago is what I call te biased talkback syndrome of some commentators.  No matter what you are writing about, those armchair commentators live in a world without causes, they sniff only effects and  instill their so ‘called impartial  views’ for the Palestinian side.
I would almost say that they don’t need the news any  blank page of news will do the job,for the full article and his 36 comments see here: NowPublic
Here is an excerpt from the original article . After the article come the relevant comments, with poor or no relevance to the news.They are in bold  letters. My own replies are in italic.
. 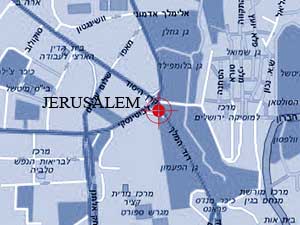 Dina, who works near the scene of the incident, told Ynet, “There are a lot of ambulances and police cars here. We heard three or four shots fired at the bulldozer driver.

At the beginning of the month, three people were murdered when an east Jerusalem terrorist travelling on a bulldozer, crashed into cars and buses in central Jerusalem.

Arik Blum, the manager of a nearby restaurant, added, “He overturned two vehicles. This bulldozer was smaller than the one used to carry out the attack at the beginning of the month. The bulldozer’s window is full of bullets.” 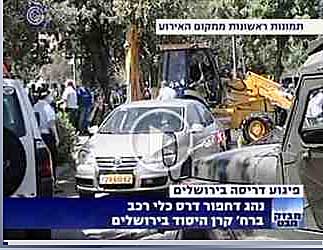 Here are the relevant comments and replies:

The D9 is the IDF’s main tool to destroy civilian homes. Israeli soldiers often give Palestinians no warning before they crash the massive vehicle through the walls of their homes. The rear blade, known as “the ripper,” tears up roads, pulling up water and sewage pipes. At least three Palestinians have been killed in recent years by the bulldozer and falling debris because they could not flee their homes in time.

Human rights organizations have documented the Israel Defense Force’s (IDF) systematic use of the D9 bulldozer in illegal demolitions throughout the West Bank and Gaza Strip. The IDF has demolished over 2,500 Palestinian homes in the Gaza Strip alone, most of them without military justification. Nearly two-thirds of those homes were in Rafah, a town and refugee camp on the southern border with Egypt. The Israeli military has used the Caterpillar bulldozer to raze over 10 percent of the town, and plans to demolish up to 20 percent more in connection with the government’s Gaza “disengagement” plan.

Your source is hrw.org headed by Kenneth Roth.

This was writen in 2006 at the time of the second Lebanon war. I suppose that hrw.org headed by Kenneth Roth, since then, has not changed his mind…So why should I believe that your today ’emotional and biased’ source is better than the Israeli source, Professor Gerald Steinberg  the Political Studies Department Chair at Bar Ilan University, who write the ” “Ken Roth’s blood libel” article. His credentials are excellent..see here.

BTW, why don’t you observe what president Abbas said “and we condemn any attack against civilians from both sides [of the Israeli-Arab conflict],” . Or what Barak Obama said “The Democratic senator also said that his “thoughts and prayers go out to all who were injured, and to their families”, .

This is a war Heritage, with victims on both sides…

And a final word, if you want to know better the Arab side of human rights violation not only the ‘Israeli side’, visit ‘Emnisty International”….see here.

Why is a bulldozer a legitimate weapon for Israel and not the Palestinians?

HRW is about as credible as they come. I understand that inside Israel they are dismissed as ’emotional and biased’. But your post and these comments are not about HRW, they are about bulldozers used as weapons against civilians.

Why is a bulldozer a legitimate weapon for Israel and not the Palestinians?

If the men in the Jerusalem bulldozer attacks are terrorists, what are the IDF forces and contractors who use them on a daily basis against civilians?

Thanks for the Amnesty International links, I’ve read many of their reports. HRW also has many reports about Palestinian human rights violations. You should check them out, perhaps you may find out why they are so respected in the rest of the world.

Always good to see your comments about good causes but for the wrong points.

Here is a short story about bulldozers. Many years ago, when the Golan Heigth was Syrian, I worked with a bulldozer near the border, in plain Israeli territory, and was almost killed by Syrian snipers.. So we welded a few iron plate on the bulldozer, and see how nice, it becomes a defence bulldozer to save my life….

Well what you call a weapon is indeed a weapon in the hands of Muslim terrorist in Jerusalem. In the Israeli hands, among other tasks, if a bulldozer is needed it is for defence not for killing people…as in my case.

And see what Barack Obama has to say about defence:

“Israel should not negotiate with Hamas so long as the Islamist group poses a threat to Israeli citizens, US Democratic presidential candidate Barack Obama said on Wednesday during his visit to the town of Sderot.

Obama said that if someone were firing on his home, where his two daughters were sleeping, he would do everything to stop the attacks – and that this is how he expects Israel to act as well.

During his brief visit to Sderot Obama also noted the terror attack in Jerusalem on Tuesday, Hezbollah attacks and the Iranian nuclear program, saying that all of these were genuine threats Israel faces alongside the Qassam rockets from Gaza. “

And for your …”Perhaps you may find out why thy are so respected in the rest of the world”.. So if Obama understand the Israeli situation is he not respected by the rest of the world, he the new messiah. And the Arab countries do they respect the Palestinians” for example Egypt with the blockade on her side of the Gaza Strip or Saudi with her petro-dollars is she respecting the Palestinians, and so on.

“The rest of the world’ is a slippery phrase. Are you entitled to speak for the rest of the world..I think that  your “rest of the world”, in the western world, is a minority and nothing more, it is a modern arena where some armchair gladiators fights  their ‘Israeli visions’, well as said in Arabic ‘Mabrouk’.

BTW. I am glad that you did discover Amnesty.org . Bring us some news from the Hamas, Palestinian human rigths violations.

A few concluding words. In general no matter what your arguments are, they are dismissed as irrelevant, mutilated and thrown away.