As a short introduction to my post I will tell you the followign story. I was born in Antwerp, in the Flemish speaking region of Belgium. In 1940 my parents and I go to Brussels to stay there. Quickly I mastered french. In these ‘prehistoric times’, French and Flemish lived in good neighbourhood in Brussels. During the ww2 I was hiding in Wallonie and learned the Walloon’s french dialect. So,  in a nutshell, this is the whole story  of how I become a “Cosmopolitan Belgian Linguist”.
And from here on, taken with a grain of Belgian humor , don’t show in Belgium that you are a “Cosmopolitan Belgian Linguist” . If you are in a Flemish speaking region don’t speak french, because it may cause you trouble.To be on the safe side speak in English. In a French speaking region speak in Flemish nobody will pay to much attention.
. 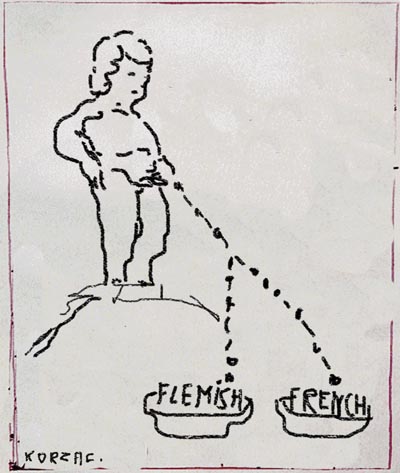 .
Well ,why all the mess?
On Agora Fox, a french language citizen media site, I found this post “L’obsession linguistique de la Flandre” or translated “The  language obsession of Flanders”.
I quote from the (transaled) post..”This arrogant linguistics obsession , in defiance of reports of the Council of Europe, the European Union and the United Nations, is not just a cultural chauvinism for a little spoken language in the world. Linked to the unassailable “right of soil”, it is the glaring reflection of a bad nationalist decline , “a kind of  non-violent fascism ” to resume the vision of the New York Herald Tribune.”….
Now,….”Consider a few actual examples: the refusal to appoint  three French mayors democratically elected on the outskirts of Brussels for non-compliance with the use of languages;   the language requirement “wooncode (code housing) for public housing in Flanders;  the obligation to know the Dutch language to be able to acquire a building or land in some communes of Flanders (Zaventem and Vilvoorde); the banning of children from playground if they are not speaking Dutch (Liedekerke);…. the obligation to notify illegal immigrants in Dutch of their expulsion, if they are intercepted at Brussels Airport- a land located in Flemish territory;   the obligation to provide public libraries with 80% of books in Dutch, while the citizens are a French-speaking majority; the prohibition against the French Community of Belgium to finance the francophone associations in Flanders.”….see here in french.
A more detailed picture comes from the little town Lidekerke, 15 minutes by train from Brussels. A few excerpts from the ‘International Herald Tribune’ exemplifies the situation, I quote…”If Belgium vanishes one day, it will be because of little towns like this one, where Flemish politicians are riding a new wave of nationalism and pushing for an independent state.”…
….”Liedekerke has only 12,000 inhabitants, but its elected council has caused a stir by insisting on the “Flemish nature” of the town. Not only must all city business and schooling take place in Flemish, true throughout Flanders, but children who cannot speak the language can be prohibited from taking part in holiday outings, like hikes and swimming classes.”…
Marc Mertens, 53, is the full-time secretary of the town, a professional manager who works under the elected, but part-time village council, he said:
…””Brussels is coming this way,” …. explaining that the people here, having gained autonomy, do not want to be overwhelmed again by another French-speaking ascendancy. More of schoolchildren, taught in Flemish, have French-speaking parents.”…
…”When I was young I never heard a foreign language here,” he said. “Now every day I meet people speaking French.There are days “when I think I’m not in my village any more,” he added.’…
…”Part of the black community here invited relatives and friends with children from Brussels to play,” he said. “There were too many, and more than half didn’t understand Dutch.”…
…”Johan Daelman, the head of the far-right, anti-immigrant Vlaams Belang party here and a village councilman, want to keep French-speaking immigrants from Africa out of town, too – all in the name of keeping Liedekerke “unspoiled,” meaning free of the crime and racial tensions of nearby Brussels.”…..etcetera..see more.
The above citations gives a feeling on what is at stake, the language crisis only being the top of the Flemish extremist  iceberg.
From my own ‘Belgian’ subjective standpoint, it is almost unbelievable, that the people I did know 18 years,  Flemish and French , are now entrenched in an ‘ethnic’ war threatening to disrupt their own country.
.

5 Replies to “To speak Flemish or French in Belgium?”