How do you make and  read a Headline?
Write “Iranians study nuclear physics in Britain” (Times Online October 28, 2007)
and then  write, I quote…”THE Foreign Office has cleared dozens of Iranians to enter British universities to study advanced nuclear physics and other subjects with the potential to be applied to weapons of mass destruction. In the past nine months about 60 Iranians have been admitted to study postgraduate courses deemed “proliferation-sensitive” by the security services. The disciplines range from nuclear physics to some areas of electrical and chemical engineering and microbiology. Additionally, figures obtained by David Willetts, the shadow secretary for innovation, universities and skills, show that in 2005-06, 30 Iranians were doing postgraduate degrees in subjects covering nuclear physics and nuclear engineering. The flow of Iranian scientists to Britain for training has caused alarm as the nuclear standoff between Iran and the West becomes increasingly tense. When confronted with the figures this weekend, the Foreign Office admitted that it was reviewing the vetting for sensitive areas of study and planned to announce an overhaul within the next few weeks to make procedures more rigorous.’.”.. see more.

In the actual context, where Israel whipped out the Syrian nuclear faculty, where the Bush administration calls the Iranian Revolutionary Guards Corps a terrorist organization and imposes sanctions on her financial institutions, where French President Sarkozy goes hand in hand with Bush, the ‘Time Online’ headline ‘Iranians study nuclear physics in Britain’ specifying that  ” 60 Iranians admitted to study postgraduate courses”, seems to be an impermissible  break into the functioning of the British policy and her security services and a slap in the face of everyone feeling he is under the trait of a nuclear war with Iran.

But ironically the cited number of 60-80 students admitted at the British universities is risible against the numbers of the Iranian Brain Drain estimated at 150000 per year heading mostly to Europe the Us and the UK. An estimated 6.5 million Iranians, almost 10 percent of the country’s population, have emigrated. The International Monetary Fund reports that more than 150,000 educated Iranians flee the country each year, “the biggest brain drain in history.”.. see here and here
(To day many of them hold very respectable position in science and engineering in the western world, see a (problematic) list here )

So not the benign number of Iranian students (‘Time Online’ ) admitted in British universities in 2006 or 2007 is the headline but the massive numbers of students (50000) cited by the ‘Iran Daily’,  among them, students of science who may at any moment of inner conviction with the ideological goals of to day Iran , return to their country or being recruited, and contribute to the further development of an nuclear Iran headed by Mahmoud Ahmadinejad in the foreground and in the background the Grand Ayatollah Ali Khamenei as the true leader. 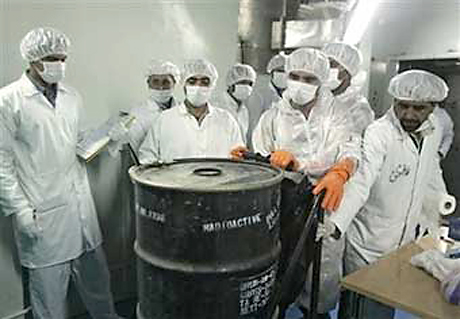 A casual source list of Ayatollahs statements about a Nuclear Iran. (2001-2007)
_______________________________________________
RAFSANJANI SAYS MUSLIMS SHOULD USE NUCLEAR WEAPON AGAINST ISRAEL
TEHRAN 14 Dec. (IPS) One of Iran’s most influential ruling cleric called Friday on the Muslim states to use nuclear weapon against Israel, assuring them that while such an attack would annihilate Israel, it would cost them “damages only”.”If a day comes when the world of Islam is duly equipped with the arms Israel has in possession, the strategy of colonialism would face a stalemate because application of an atomic bomb would not leave any thing in Israel but the same thing would just produce damages in the Muslim world”, Ayatollah Ali Akbar Hashemi-Rafsanjani told the crowd at the traditional Friday prayers in Tehran, see here.
Qods Day Speech (Jerusalem Day), see here

On December 3, 2004, Iran’s former president and an Islamic cleric , Akbar Hashemi Rafsanjani alluded to Iran’s position on nuclear energy:Allah willing, we expect to soon join the club of the countries that have a nuclear industry, with all its branches, except the military one, in which we are not interested. We want to get what we’re entitled to. I say unequivocally that for no price will we be willing to relinquish our legal and international right. I also say unequivocally to those who make false claims: Iran is not pursuing nuclear weapons, but it will not give up its rights.Your provocation will not make us pursue nuclear weapons. We hope that you come to your senses soon and do not get the world involved in disputes and crises, see here.

Iran’s Leader: No Plans For Nuclear Bomb
Ayatollah Ali Khamenei Denies Country Is Working Toward Building Nuclear Weapons
Speaking to an audience of Revolutionary Guards, the elite military unit that answers directly to him, Supreme Leader Ayatollah Ali Khamenei made a rare direct statement that Iran is not interested in nuclear weapons….Iran insists it wants to master the technology only to meet future power needs and argues it is entitled to enrich uranium under the Nuclear Nonproliferation Treaty provision giving all pact members the right to develop peaceful programs…. see here.

Last week, Iranian President Mahmoud Ahmadinejad displayed his talent in double talk again. He claimed the recent report by the International Atomic Energy Agency (IAEA) had officially cleared Iran, while in the same breath boasted that his regime has “taken another step in the nuclear progress and launched more than 3,000 centrifuge machines, installing a new cascade every week.” A day later, Supreme Leader Ali Khamenei left no doubt that Ahmadinejad indeed speaks for him. He vowed that the theocratic regime would never yield to international demands to stop nuclear enrichment, and that it would outsmart “drunken and arrogant” Western opponents in the standoff, see here.

Ayatollah: Iran’s nuclear path ‘irreversible’
TEHRAN, Iran (AP) – Iran’s supreme leader issued a tough line on his country’s suspect nuclear program Tuesday, saying it is “irreversible” and any retreat would endanger the Islamic republic’s independence, see here.
_________________________________________________________________________________
Iran’s Gray Area on Nuclear Arms
Despite Official Assertions That Islam Requires a Ban, Some Clerics See Justification
“This question is ambiguous,” said Grand Ayatollah Jalalodine Taheri, who was a leading figure in the Iranian government before becoming a sharp critic. Taheri, 80, said during an interview at his bedside in the central Iranian city of Isfahan that “taking weapons of mass destruction as a whole, I’m against it.” But he added that religious texts might offer avenues that would allow stockpiling such weapons in the name of deterrence or self-defense”… see here

An article in the “jerusalem Post”
“Another major victory for messianics“….”THE MOST worrying revelation about Jalili’s past appeared recently in the Iran Diplomacy Web site. This Teheran-based news agency, in an article titled “Dr Ali Leaves, Dr Saeed Enters” revealed that for most of his career at the Foreign Ministry, Jalili worked closely with Mojtaba Hashemi Samare, a leading messianic and a close ally of Ayatollah Mesbah Yazdi, the most well-known and high-ranking messianic cleric in Iran.”….

Who is Ayatollah Mohammad Taghi Mesbah Yazdi……… “Ayatollah Mohammad Taghi Mesbah Yazdi (Persian:  (born 1934) is a hardline Iranian Shia cleric and politician. He is widely seen as President Mahmoud Ahmadinejad’s spiritual advisor, and a member of Iran’s Assembly of Experts [1][2], the body responsible for choosing the Supreme Leader. Mesbah Yazdi espouses complete isolation from the West and proclaims non-literal interpretations of the Quran as heretical[3][4]. He advocates a return to the values of the 1979 Iranian revolution and is a prominent opponent of the Reformist movement in Iran.”… see here.